César A. Parral
girasol.vi@ucr.ac.cr
Friday 25 de May, 2018
The Max Planck Society of Germany ((MPG), the National Rectors’ Council (CONARE ) and the Ministry of Science, Technology and Telecommunications (MICITT), signed an agreement to strengthen scientific collaboration in joint research projects and research-based training. 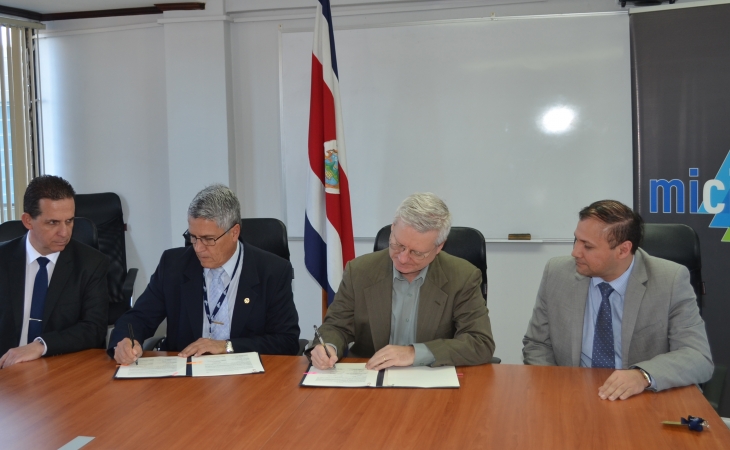 The agreement was signed in Costa Rica by Dr. Luis Guillermo Carpio-Malavasi, president of CONARE (second left) and Dr. Marcelo Jenkins-Coronas, Minister of MICITT (third from left to right). Observing are Dr. Fernando García-Santamaría (first to the left) and Dr. Federico Torres- Carballo, director of the Research and Development Department of MICITT (right).

The agreement arose as a result of the visit of a high-level delegation headed by the German Federal Minister of Education and Research, Dr. Johanna Wanka, who visited Costa Rica between February 10 and 11, 2016.

Then, from May 15 to 21, 2016, representatives and researchers from the Max Planck Society from Germany visited our country with the purpose of learning about science in Costa Rica. SEE NOTE.

The Agreement was made official on Friday, January 20, 2016 with the signing of a Memorandum of Understanding by Doctors Marcelo Jenkins-Coronas, Minister of MICITT and Luis Guillermo Carpio-Malavasi, President of CONARE.

Previously, in December of last year, it had been signed in Germany by Doctors Martin Stratmann and Ludwing Kronthaler President and General Secretary of the Max Planck Society of Germany respectively.

In addition, joint seminars, workshops, exhibitions, outreach activities, and other scientific meetings will be organized, research projects of common interest will be promoted through the joint international calls for proposals and mutual benefit collaboration in science and technology will be expedited through the interaction between relevant institutions (Max Planck Institutes and universities and research centers in Costa Rica).

For Dr. Marcelo Jenkins-Coronas, Minister of Science, Technology and Telecommunications, this Agreement will contribute to the development of scientific research at the highest level in different lines of strategic research for the country. “We are partnering with one of the countries that invest the most in research worldwide,” he said.

“Germany is a country with a larger scientific community than our country, but ours, although it is small, has all the potential and knowledge to be one on one with Germany in certain strategic areas,” said Dr. Jenkins after signing the Agreement.

For his part, Dr. Fernando García-Santamaría, UCR Vice Rector for Research, who attended as guest, said that the Agreement allows establishing research relationships with a world power such as Germany, with a research group such as the Max Plank Society, constituted by more than 80 research centers devoted to basic research.

“This Agreement gives us the possibility to get even closer to the high-level research that is being developed in the world and it will contribute to the scientific and technological development of the country,” said the Vice Rector.

The Vice Rector said that at this time, UCR has five proposals to initiate the exchange of research. Recently two researchers from this House of Studies traveled to Germany to make a short visit to the Max Planck institutes, doctors Adrián Alberto Pinto-Tomas of the Research Center in Microscopic Structures (CIEMIC) and Mario Alberto Blanco-Coto, of the Lankester Botanical Garden Experimental Station (JBL).

"They will present their research proposals and from there, they will define the work plan for the following years. In addition, there are four more groups that are already defined and three additional groups on behalf of which we are negotiating future visits.

Currently, the Max Planck Society has 83 research institutes. It carries out basic research in the biomedical, chemical, physical and technological disciplines, as well as in social and human sciences.

It generates around 18 Nobel Prizes and 15,000 annual scientific publications, and also promotes and develops multiple innovative and pioneering research projects, thus providing the best conditions for responsible researchers in the search for answers to fundamental scientific and prospective questions. 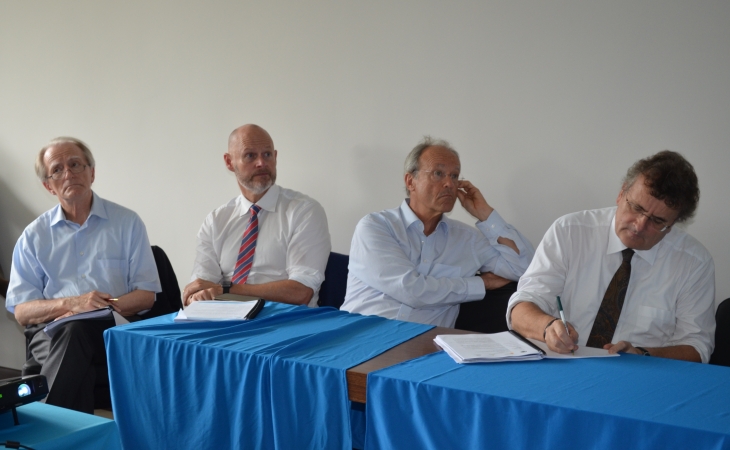 In May of last year, a delegation of the Max Planck Society visited the country to meet with researchers and university and government authorities, and also to visit centers and institutes of state universities.